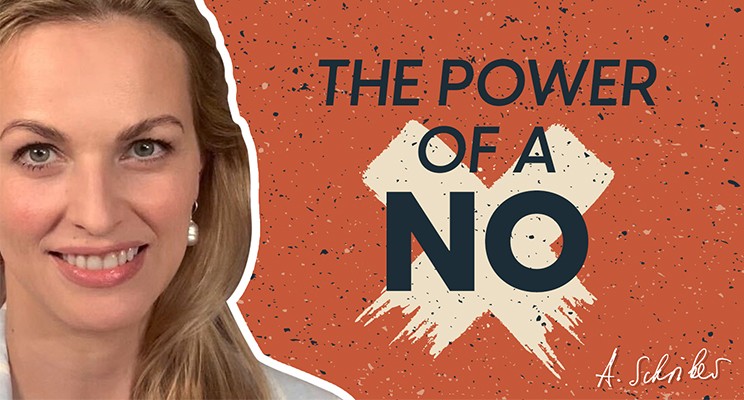 I can’t tell you how many times I’ve heard NO in my life, and in different variations – no, you CAN’T do it, or it’s just NOT possible, forget about it. Accomplished professionals, experts, mentors, coaches, bosses, colleagues, subordinates, or my nearest relatives uttered NO the most. Also, I have heard it so many times from pseudo-experts, former boyfriends, ex-bosses, and past ecosystems or communities who had rejected me in response to me going against their rules.

If I’d listened to those NOs carefully enough throughout my professional career, I probably wouldn’t have accomplished anything, including the simplest and easiest achievements when being an entrepreneur, film producer, or corporate research manager. When my parents said I shouldn’t move to a larger city in search of better professional opportunities 20 years ago, where would I be now if only had I listened to them? Or when I was talking to a senior developer and discussing a very complex solution to a problem that no one could solve in the past, I am sure Nanos, my fourth company, would have never existed.

And the opposite, there was not a single achievement I have accomplished to this date, that someone wouldn’t point fingers at me directly or behind my back telling me I can’t do it, or that it’s a total waste of time in this particular case.

A NO should be altogether separated from critique. Critique ought to be accepted as your daily normal, taken seriously, or with a grain of salt, or not considered at all. I accept critique from professionals and experts in my field as it makes me informed.

This type of critique is not upsetting but helps to think deeper and see all possible outcomes of my new and promising ideas. I listen to the critique of my closest family members – my boyfriend and his family, my parents and my brother, though it comes less and less on their part.

Maybe because they know how I react to it and use these tiny NOs as an acceleration to pursue the goals instead. I would not pay attention to critique from non-experts or pseudo-experts, as well as from people on social media who are, for instance, connected with me on LinkedIn and leave comments based just on their understanding of the title without reading my full article.

It’s rather difficult to resist and almost too easy to give up on your most promising but crazy ideas when trying to bounce them off the circle of persons whom you trust. Once you hear a NO to your newly envisioned concept, you almost feel relieved and excused not to pursue it.

But here is something for you – resist this action next time you are given a NO, be it a potential client, or your boss, or your own mind, and do exactly the opposite – convince yourself to give it a try despite all logical arguments you have heard from them.

There is a huge intrinsic power that is hidden in the next “No, you can’t” you will hear, if you apply it right. Take the pain and frustration from receiving this NO and give it a powerful, positive force. Turn all that new power into thinking about how you can make that ‘no, you can’t’ into a ‘yes, I actually can!’.

Apply this power throughout your day and just wait for events to start happening around you. It sounds simple but you will be amazed that once you are subconsciously open to a certain idea (relocating to another country, opening a new business, switching a job), there will be multiple series of events and people who will appear out of nowhere to support you.

You will be thoroughly “tested” by these events and people just to make sure that what you want now is really the right path for you. As a result, there will be so much power accumulated in the background, which wouldn’t be possible if you ignored your intuition and instincts initially and listened to the NO instead.

Particularly hard to resist are NOs from your mentors. I value mentors more than coaches. A difference between a mentor and a coach is that the coach is paid by you and a mentor is not. With a mentor – it’s a complex learning curve which only works if this relationship is interesting for both – for a mentor to spend time on mentoring, and for the mentee – to feel that the mentorship is useful.

I’ve had so many mentors in the past – both men and women. There were mentors who taught me with one “free” phone call more than any of the high-paid coaches I had during my corporate research career.

It’s important to mention that mentors are also those who show you by their own example of how not to do things. It can be far more effective than telling you what to do. Mentors are also the ones that made me cry a lot, when I was hearing from them – No, Sasha, you can’t. Because I trusted them so much and would bring my wackiest professional ideas to them regularly. Those were probably the most important NOs in my life. They made me rather angry that I propelled myself to accomplish my ideas the fastest way possible.

Today, I look forward to a NO now and then. Because a NO can be a beautiful thing that gives energy and power to achieve anything you want.